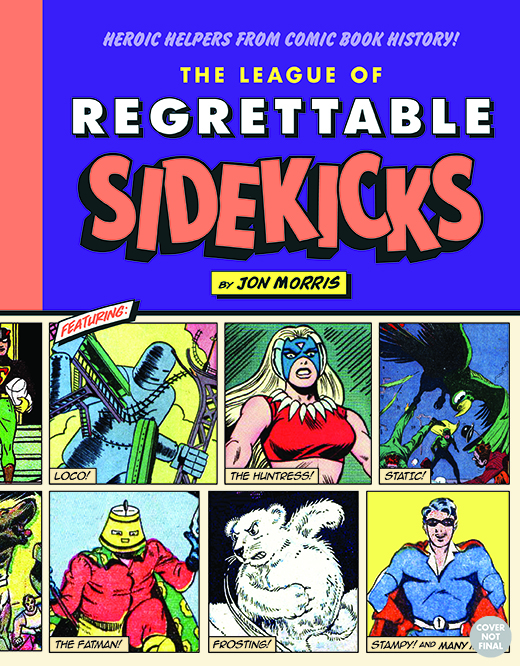 A hilarious spotlight on the strangest second bananas in superhero comics, including junior partners, animal assistants, and even heinous henchmen (sidekicks of the villain world). Complete with vintage art and publication details. Batman has Robin. Captain America has Bucky. And Yankee Doodle had Dandy. Being a superhero is hard work, which is why so many comics characters rely on a sidekick for help. Someone who can watch the hero's back, help search for clues, or, if nothing else, give the hero someone to talk to. But just as not every superhero achieves the glory of Batman, not all sidekicks are as capable as the Boy Wonder. In The League of Regrettable Sidekicks, author Jon Morris discusses some of the strangest iterations of the sidekick phenomenon, and in the process explores how important these characters were to comic book storytelling. You'll meet plucky but forgotten helpers like Thunderfoot (explosive-soled assistant to the Human Bomb), heroic super-pets (like Frosting, polar bear pal of space hero Norge Benson), fan favorites (say hello to Rick Jones, sidekick to half of the Marvel Universe), and obscure partners of iconic heroes (Superman Junior's career barely got off the ground). Plus: pernicious profiles of regrettable henchmen and minions, the sidekicks of the supervillain world. Vintage art from the comics completes the experience.Drawing on the entire history of the medium, The League of Regrettable Sidekicks celebrates characters and stories that haven't seen the light of day in decades, pulling from defunct and long-forgotten comics publishers as well as DC and Marvel. In this third volume of his Regrettable series (The League of Regrettable Superheroes, The Legion of Regrettable Supervillains) Jon Morris provides insight and context, as well as his signature mockery of and affection for these overlooked treasures from comic book history. A must-have collection for comics readers; perfect gift for fans of comics, cartooning, and pop culture. A hilarious but affectionate look at forgotten sidekicks and supporting characters who are strange even by comic book standards. Browseable format with pithy page-length entries for each featured character as well as boxes, lists, and sidebars. A lively, fun design that includes vintage comic book art. Follow-up to the super-popular League of Regrettable Superheroes. Similar design and same trim size; they shelve well together. Will appeal to both casual comics readers and diehard fans, with a mix of characters that includes fan favorites and obscure finds. Series Overview: Comic books weren't always a billion-dollar industry, but they've always been a unique and fascinating medium. Trace the humble roots of comic book history, from obscure characters to vintage art to long-lost stories about creators and publishers.