Forking Good: A Cookbook Inspired by The Good Place 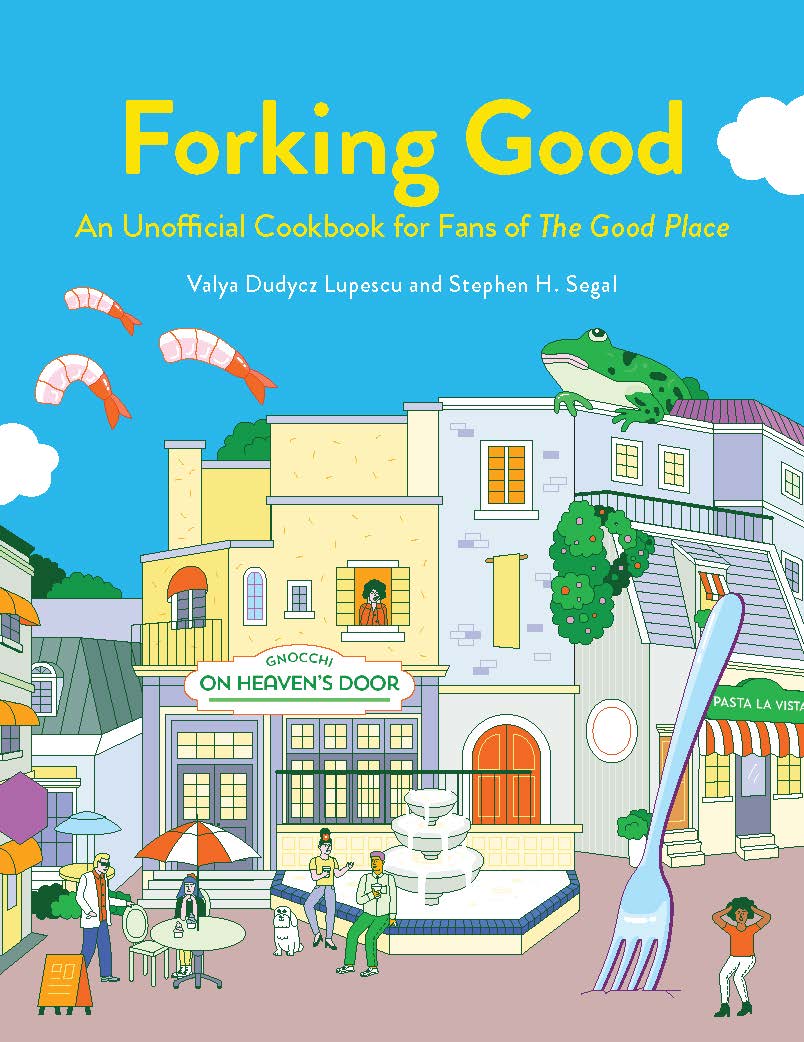 A fun, lively, and fully illustrated cookbook of 30 original and practical recipes inspired by NBC's hit sitcom The Good Place, filled with the absurd, pun-driven food humor and accessible philosophy that makes the show so popular with fans. With its high concept, exceptional writing, eye-popping set design, stellar cast, meaningful explorations of what it means to be a good person, and clam chowder fountains, The Good Place has captured the hearts and minds of critics and viewers alike. Known for its unique blend of existential humor and philosophy, the fantasy-comedy follows Eleanor, a young woman who finds herself in a heaven-like utopia known as The Good Place after her untimely death, even though she knows she belongs in The Bad Place. With the help of her new friends Chidi, Tahani, and Jason, Eleanor designs a self-improvement plan to earn her spot in The Good Place, even as her presence threatens the stability of the afterlife, sending jumbo shrimp flying through the sky and frozen yogurt flowing through the streets. For the first time ever, fans can indulge their cravings for The Good Place with delicious, comforting, original recipes like "Macaroni and Socra-cheese," "I Think Therefore I Clam (Chowder)," "Arendt You Glad I Didn't Say Banana (Split)," "I Kant Believe It's Not Buttermilk Pancakes," and more. Each recipe title references a philosopher or philosophical concept from the show and uses food analogies to explain those concepts to readers who, like Eleanor, can't always follow Chidi's lectures. A refreshing and entertaining twist on cookbooks, Forking Good will inspire you to brew a pot of "Moral Uncertain-tea" as you catch up on the latest episode, plan a "Hegel's and Locke's Brunch" for your next viewing party, or whip up a batch of "Muffin to Lose" in between seasons. And if you're not the type to slave over a hot stove, you could always throw on your teal powersuit, make yourself a "Mindy" cocktail (rum and a lot of Coke), and re-binge your favorite show. Forking Good will come out in time for the Holiday 2019 season and the fourth season of the show. There hasn't been any publishing for The Good Place so far, which means our book will have a unique advantage in gift channels. The show's profile increased in its second and third seasons and was nominated for Best TV Comedy and Best Actress for Kristen Bell at the 2019 Golden Globes. Anticipation for the fourth season will be high.