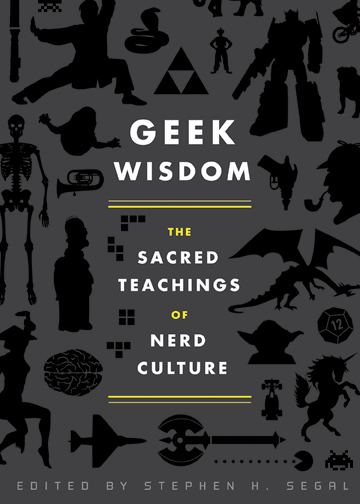 The 21st century is a world where, more than ever, information and ideas are power—which means it's a world where the people with information and ideas are the most desirable people of all. After years of being pantsed after class and mocked for our obsessions with math, sci-fi and computers, finally, geeks have indeed inherited the earth. Yet the geek remains a mysterious figure: standing quietly in the back of the room like a modern-day Merlin, thinking weird and complicated thoughts to which others are not privy. Until now. THE BOOK OF GEEK does what every geek secretly wishes to: knocks down that personal forcefield to tell the world how incredible all these ideas are. Using the primary language of geeks—quotes and references from moves, books, TV shows, scientists, ancient gods, and comic books—THE BOOK OF GEEK illuminates the far-ranging mindscape of the 21st-century info-wizard. Through hundreds of short, colorfully profound meditations, you\'ll discover why Mr. Spock is a more powerful sex god than Brad Pitt ever was; how the sci-fi horror classic Aliens offers helpful tips for motherhood; and how staring at a chessboard can unlock a life-changing revelation about your very existence. We live in the era of the geek. Computer nerds are our titans of industry; comic-book heroes are our Hollywood idols; the Internet is our night on the town. Clearly, the geeks know something that other folks don't--something we'd all do well to learn from. So here it is: Geek Wisdom. Painstakingly gathered and interpreted by a diverse team of hardcore nerds who've spent years por- ing over the most beloved texts of the modern-day imagination. Beginning with close to 200 of the most powerful and oft-cited quotes from movies ("Do, or do not--there is no try"), television ("The truth is out there"), comics ("With great power comes great responsibility"), science, the Internet, and more, Geek Wisdom offers illuminating insights into the eternal truths to be found therein. Yes, this collection of mini-essays is by, for, and about geeks--but it's just so surprisingly profound, the rest of us would have to be dorks not to read it. Editor Stephen H. Segal is a 2009 Hugo Award winner and World Fantasy Award finalist for Weird Tales, America's most historic geek magazine, with well-established contacts throughout the sci-fi media. US14.95$