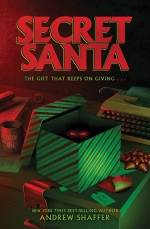 TARGET CONSUMER: Horror fans, especially fans of comedic horror movies like Happy Death Day, The Cabin in the Woods, Drag Me to Hell, Shaun of the Dead, Zombieland, and Scream. Fans of Andrew Shaffer From the New York Times bestselling author of Hope Never Dies, T h e Office meets Stephen King in this horror-comedy about an office Secret Santa gift exchange gone wrong, set at a publishing house in t h e 8 0 s . Ever since Xavier Blackwood died, leaving his son in charge of his venerable publishing house, things have been changing around the office. Enter Zahara Obi-Cox, a superstar horror editor hired to launch Blackwood-Patterson's new horror imprint in hopes of finding the next Stephen King, Anne Rice, or Peter Straub. It's a dream job for Zahara but a nightmare for her colleagues, who resent management's desire to "go genre"--and Zahara by extension. The only thing that isn't changing is the Blackwood-Patterson Christmas party. It's the one night everyone cuts loose, but Zahara will be spending most of the party in her office, reading the hottest horror manuscript in town before a major auction. But when an assistant drops off her Secret Santa gift--a hideous carved figurine of Santa that seems like an afterthought at best and an insult at worst--something weird happens: anyone who interacts with the figurine drops dead, except for Zahara. With the help of a ragtag band of Blackwood-Patterson employees, redshirt interns, and midlist author Fabien Nightingale, Zahara has to find out the secret of her Secret Santa gift before her entire company is wiped out by Christmas morning in this horror-comedy from the New York Times bestselling author of Hope Never Dies and Hope Rides Again. FROM TALENTED GENRE SATIRIST ANDREW SHAFFER: Andrew has tackled political thrillers, erotic romance, science fiction, and mysteries and has achieved New York Times bestselling success along the way. Now he's ready to sink his teeth into the horror genre with this fun and campy holiday-themed book that delivers real thrills and chills, riffing on office culture, publishing, and the horror genre itself along the way. HORROR AND COMEDY: THE PERFECT PAIRING: This is perfect for fans of horror-comedies and comedic horror like Happy Death Day, The Cabin in the Woods, Drag Me to Hell, Tucker and Dale vs. Evil, Scream 2, Shaun of the Dead, Zombieland, and the Scary Movie franchise. A UNIQUE OFFERING IN THE HORROR PUBLISHING MARKET: The horror publishing market is steeped in dark and serious novels. Blending horror and comedy, Secret Santa will attract an untapped readership from the screen to the page--which is what Quirk does best--and will be the perfect Secret Santa, White Elephant, or stocking stuffer gift.