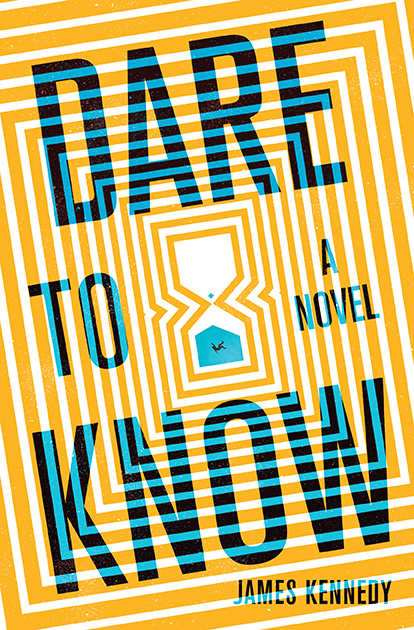 At first glance, Dare to Know looks like a classic race-against-time thriller in which a hero must go to great lengths to prevent the worst from happening. But there’s a twist. When we meet our hero, a Willy Loman–like figure, he’s at the beginning of a particularly bad day at work selling predictive death technology—100 percent accurate, but expensive—to people who don’t really want it. By the end of that already-bad day, he is compelled to use that technology on himself and discovers that he has just died, though he seems very much alive. Has the worst already happened to him? And is it worth fighting for his life if he’s already dead? What follows from this intriguing premise is a different kind of race against time as the narrator travels through his memories to figure out what is happening to him—and why. Along the way we meet two meaningful people from his past: Renard, an enigmatic boy from junior-high physics camp who introduced him to metaphysical ideas that continue to haunt him; and Julia, his college sweetheart turned colleague who climbed the ladder of success with him at Dare to Know, the mysterious company that kicked off the predictive death industry. Woven through these memories are images that make little sense to our hero at the time but fall together like puzzle pieces as he travels across the country to get to Julia, who has in her possession a blue envelope that contains the death prediction she calculated for him when they were still together. Blending science, philosophy, myth, and romance, James Kennedy’s fascinating adult debut tells an intimate story of a man forced to confront his own mortality with epic stakes on the line that become clear only once he reaches the astonishing ending. Reminiscent of the mind-bending films of Christopher Nolan and high-concept, breathtaking novels like Jeff VanderMeer’s Annihilation, Dare to Know is a brilliant, luminous, heartbreaking, and challenging book about what it means to be human when you’re facing the end. About The Book… Dark Matter meets Annihilation in this mind-bending and emotional speculative thriller set in a world where the exact moment of your death can be predicted–for a price. Our narrator is the most talented salesman at Dare to Know, a prestigious and enigmatic company in the death-prediction business. While he has mastered the art of death, the rest of his life is an abject failure. Divorced, estranged from his sons, and broke, he's driven to violate the cardinal rule of his business by forecasting his own death day. The problem: apparently he died 23 minutes ago. The only person who can confirm his prediction is Julia, the woman he loved and lost during his rise up the ranks of Dare to Know. As he travels across the country to see her, our narrator is forced to confront his past, the choices he's made, and the terrifying truth about the company he works for--and his role there. Highly ambitious and totally immersive, this adrenaline-fueled thriller explores the destructive power of knowledge and collapses the boundaries between reality, myth, and conspiracy as it races toward its stunning conclusion. Key Selling Points... PREDICTIVE TECHNOLOGY CONCEPT HAS BIG POTENTIAL: The high concept calls to mind shows like Black Mirror and cultural and scientific conversations about the ethics of predictive technology, especially with the rise of predictive artificial intelligence like Google's Medical Brain. FILM RIGHTS HAVE SOLD: Film rights were sold in a multi-bidder auction simultaneously with print rights, which points to the strength of the story and the writing. AUTHOR HAS PHYSICS BACKGROUND: James Kennedy is trained in physics, which lends authenticity to the science behind the death particles. This will earn him credit with SF/F fans and cater to readers who are inclined to parse the science and mythology of their favorite books, movies, and TV shows on Reddit, Twitter, and other forums, which could help create a fandom around the book.