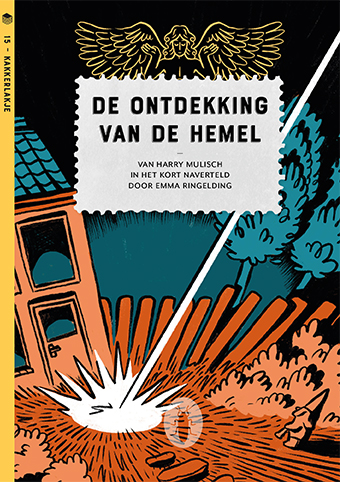 Perhaps the largest, thickest and most important work in Harry Mulisch’s oeuvre. In a wonderfully fresh comic adaptation by Emma Ringelding. Is heaven an organization about to be understood and rolled up by the technologically advanced man of the twentieth century? The Discovery of Heaven (1992) is a total novel in which all themes and obsessions from the work of Harry Mulisch come together in 65 chapters. This monumental book is at the same time a psychological novel, a philosophical novel, a time novel, a development novel, an adventure novel and an all-encompassing mystery play. The Discovery of Heaven is a book by the Dutch author Harry Mulisch (1927-2010). The book is seen by critics and at the time also by Mulisch himself during his lifetime as his magnum opus, his greatest and most important work. It was shortlisted for the AKO Literature Prize in 1993 and it was nominated for the NS Public Prize. The book was made into a film in 2001 under the direction of Jeroen Krabbé, in a British-Dutch co-production. Little cockroaches is a new collection by Loopvis that will start in June 2019. Loopvis plans on a grand entrance in the Netherlands and Belgium bookshops where they will roll a complete card mill, filled with 32 little Cockroaches. Each booklet comes with a matching envelope. Themed Little cockroaches will become small collectibles. As for Themes, think of a story to comfort someone who has a hard time, something about birthdays, being sick or sad, about the death of a relative or pet, about moving, about friends (or the lack of, about getting used to a new school or sister, or about a safari in your own back yard... the list is endless. Categories: There will be 4 categories: fiction, poetry, young and culinary. The aforementioned topics can be found in all these categories. A collection of poems about death in the poetry category, a story about friendship in Young, consoling recipes in a culinary booklet and celebrating a literary treatise on birthday in Literature. Illustrations The most important thing of course is the content. Each booklet is illustrated in 2, 3 or 4 colors, in comics style, or line drawing, or 4 color illustrations. All styles and art are welcome! Frequency: after the first batch of 32 little cockroaches, every two months four to eight new titles come out, divided over the different categories. In addition, a series of 'special editions' will appear at various times during the year. A series of cockroaches around a certain (current) theme such as sports, public holidays and so on. Specifications The booklets are 12x17 cm and count 16 pages with a cover of thicker paper. They are bound with a bindrsstitch, which makes them considerably more elegant than stapled booklets. Everything is produced within the Netherlands. The printing is done by a sustainable printer in Groningen and all paper comes from Europe. The name: even should the earth be devastated, cockroaches will survive. The same applies to us, makers of texts and illustrations: however difficult and how minimal the earnings are, people will always keep writing, drawing, dancing, etc. We hope that our Little cockroaches will spread all over the world, just like a plague. And finally: the name lingers. Whether you are horrified by cockroaches or not, it is something that you won’t immediately forget!