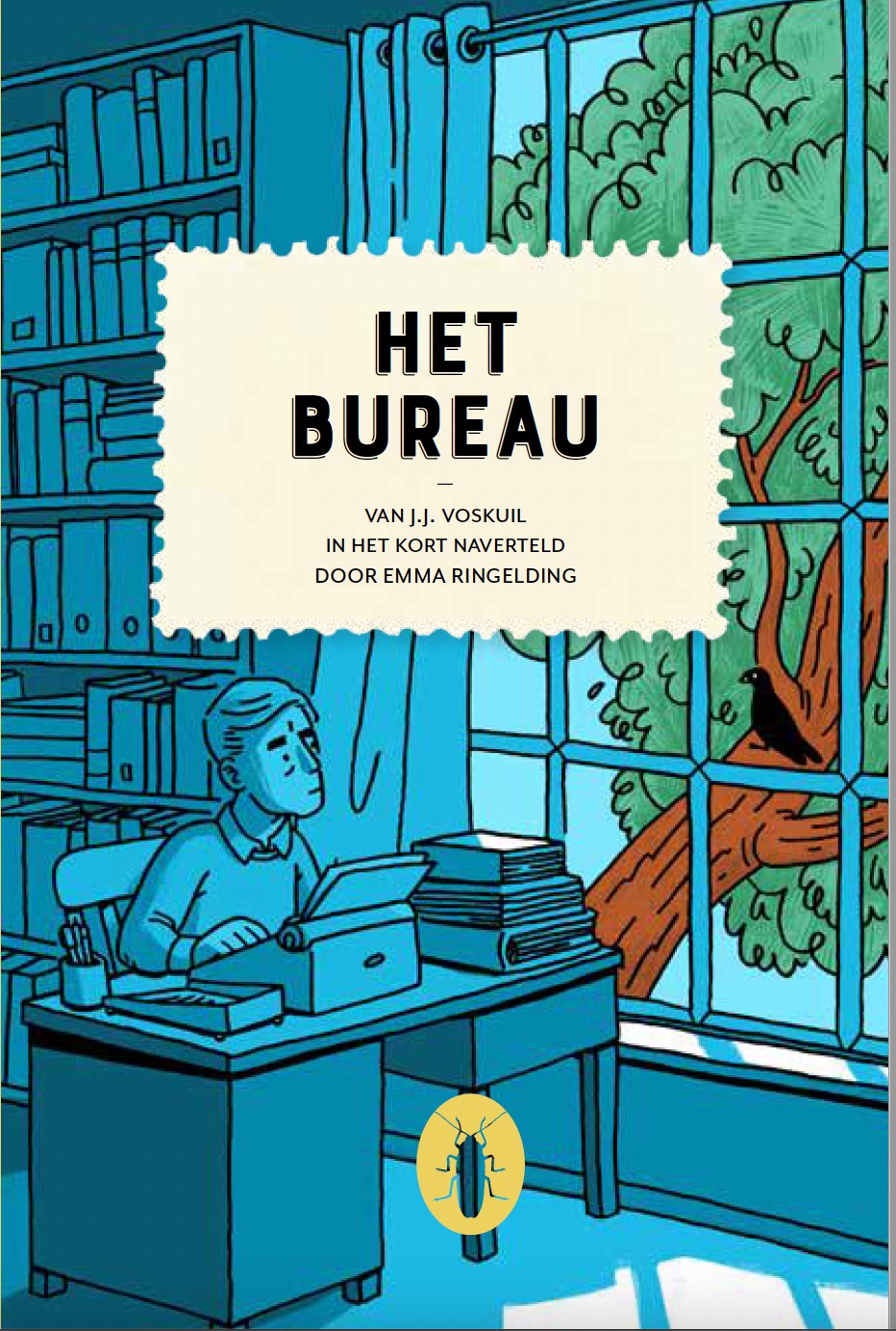 For the Little Roaches we don’t necessarily have to stick to known text forms. A short story can easily be combined with a poetic text. And in a booklet full of recipes you can find a poem. Voskuil wrote over five thousand autobiographical pages about his workplace, the P.J. Meertens Institute, to which he was affiliated as an ethnologist. The series caused a run on the bookstore, people became completely addicted to it. J.J. Voskuil (1926-2008) stands alone in Dutch literature. In 1963 he published Bij nader inzien (On Second Thoughts), a twelve-hundred-page novel which describes with photographic precision the lives of a group of students in Amsterdam between 1946 and 1953. For thirty-three years Voskuil was a one-book author and this book seemed to be attaining cult status, especially after its successful adaptation for television in 1991. Until 1990 Voskuil worked at the Bureau for Dialectology, Folklore and Onomastics. Following his retirement he wrote the novel cycle Het Bureau: seven books, a total of 5,500 pages, published between 1996 and 2000. Part two of the cycle, Vuile handen (Dirty Hands), has been shortlisted for the 1997 Libris Literature Prize. A year later Plankton, volume three of the cycle, was awarded the same Libris Prize. The books of Voskuil were translated in German andSwedish Little cockroaches is a new collection by Loopvis that will start in June 2019. Loopvis plans on a grand entrance in the Netherlands and Belgium bookshops where they will roll a complete card mill, filled with 32 little Cockroaches. Each booklet comes with a matching envelope. Themed Little cockroaches will become small collectibles. As for Themes, think of a story to comfort someone who has a hard time, something about birthdays, being sick or sad, about the death of a relative or pet, about moving, about friends (or the lack of, about getting used to a new school or sister, or about a safari in your own back yard... the list is endless. Categories: There will be 4 categories: fiction, poetry, young and culinary. The aforementioned topics can be found in all these categories. A collection of poems about death in the poetry category, a story about friendship in Young, consoling recipes in a culinary booklet and celebrating a literary treatise on birthday in Literature. Illustrations The most important thing of course is the content. Each booklet is illustrated in 2, 3 or 4 colors, in comics style, or line drawing, or 4 color illustrations. All styles and art are welcome! Frequency: after the first batch of 32 little cockroaches, every two months four to eight new titles come out, divided over the different categories. In addition, a series of 'special editions' will appear at various times during the year. A series of cockroaches around a certain (current) theme such as sports, public holidays and so on. Specifications The booklets are 12x17 cm and count 16 pages with a cover of thicker paper. They are bound with a bindrsstitch, which makes them considerably more elegant than stapled booklets. Everything is produced within the Netherlands. The printing is done by a sustainable printer in Groningen and all paper comes from Europe. The name: even should the earth be devastated, cockroaches will survive. The same applies to us, makers of texts and illustrations: however difficult and how minimal the earnings are, people will always keep writing, drawing, dancing, etc. We hope that our Little cockroaches will spread all over the world, just like a plague. And finally: the name lingers. Whether you are horrified by cockroaches or not, it is something that you won’t immediately forget!